Like many households around the country, no Christmas is complete without an annual viewing of the 1983 comedy A Christmas Story.

Christmas came early this year for fans of the movie as Vancouver Presents was LIVE on Facebook from North Vancouver’s Goodlad with Zack Ward, who played “Scut” Farkus, the neighbourhood bully in the holiday classic.

Live with Zack Ward (aka "Scut" Farkus from A Christmas Story)

We were LIVE from North Vancouver’s Goodlad with Zack Ward who played "Scut" Farkus, the neighbourhood bully in the holiday classic A Christmas Story.In town to support his friend, fellow actor and Goodlad Clothing owner Shane Meier, Ward will act as ‘barista for a day’ on Saturday, December 21, to launch a toy drive for the North Shore Neighbourhood House.In this Facebook Live event, we chat with Ward about his role in the iconic film, his career, and find out more about the fundraiser.

“We are excited to share some more of the Christmas spirit,” says Vancouver Presents contributing editor Mark Robins. “We reported on the ultimate gift from Vancouver actor Michael Teigan earlier this week and are excited to bring another feel-good holiday story from the world of entertainment.”

In town to support his friend, fellow actor and Goodlad owner Shane Meier, Ward will act as ‘barista for a day’ on Saturday, December 21, and launch a toy drive for the North Shore Neighbourhood House.

An independently owned barbershop, coffee bar, and men’s clothing store in North Vancouver, Goodlad will accept toys and cash donations for the North Shore Neighbourhood House on December 21 in exchange for Ward’s autograph.

Ward and Meier have known each other since they both appeared as brothers in the television movie Harvest of the Heart 25 years ago. A busy child actor himself, Meier has appeared in countless film and television roles including that of Clint Eastwood’s son in the Oscar-winning film Unforgiven.

“I’ve used my infamy as Scut as a lighting rod to raise money and awareness for bully prevention programs around the country,” says Ward. “Scut Farkus has become the Darth Vader of Christmas, a character the fans love to hate. This year I’m coming to Goodlad to support my ‘little brother’ by raising money and toys with a toy drive to support the North Shore Neighbourhood House.” 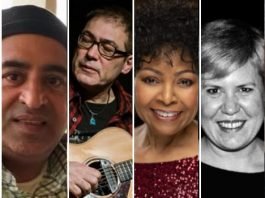