This November, Vancouver audiences will have the unique opportunity to be immersed in Brazilian arts and culture in the heart of the city with Aquarela do Brasil: An Explosive Celebration of Music and Dance.

Presented by the Vancouver Latin American Cultural Centre (VLACC), and led by Vancouver-based percussionist Sal Ferreras, the event is inspired by the 60th anniversary of the birth of Brazil’s famous bossa nova musical movement.

A fan of bossa nova, samba and choro music styles from the time he was in elementary school, Ferreras hopes the concert will help the non-profit VLACC to further its mission of fostering a greater understanding and appreciation of Latin American arts and culture.

“There are a large number of musicians in this city who have been inspired or influenced by the work of many different Brazilian musicians over many years,” says Ferreras. “Now that we have a vibrant and active Vancouver Latin American Cultural Centre, I thought it was time to bring to them the concept of hosting an evening of Brazilian music.”

According to Ferreras, the bossa nova musical movement is significant, as it transformed the international music scene by influence of its beautiful sounds, and “the exuberance of samba and the carnival tradition”.

First heard on the beaches of Rio de Janeiro in the 1950s, bossa nova has gone on to be one of Brazil’s best-known musical styles. A fusion of samba and jazz, it was popularized for North American audiences in such songs as the Grammy Award-winning “The Girl from Ipanema”.

As an internationally recognized percussionist and music producer, Ferreras adds, “The variety and complexity of Brazilian rhythms and the unique nature of its percussion combinations provided a whole new palette for percussion artists that remains inspiring to this day.”

Ferreras believes that Brazilian music can appeal to a wide range of audiences because of the beauty of the Portuguese language, the harmonies, and the melodic phrases.

“[Portuguese] is so smooth and so well-suited to musical settings,” he says. “Then there is the sheer sensuality of the harmony and lyrical lines. It’s sophisticated music with a lot of complexity that sounds beautiful and can appeal to all kinds of people.”

In addition to the music, performance group Aché Brasil will showcase various dance styles from Brazil’s regions, including samba, frevo and maracatu.

Given the range of styles and rhythms in Brazil’s music and dance, Ferreras says audiences may be surprised to find out just how rich and expansive it really is.

“Most people are aware of a narrow band of music traditions, but Brazil is an enormous country with a deep, deep rooting in a vast range of styles, compositions, dances and instrumental colors,” he says.

Not only looking forward to working with the performers assembled for Aquarela do Brasil, Ferreras is just as excited about sharing it all with Vancouver audiences.

“I look forward to having people enjoy the joy of Brazilian music and of celebrating just how big a part of world music these styles have become,” he says. “This show will be fun, it will be intimate, it will explode with strong rhythm and dance and it will certainly delight the listening audience.”

Aquarela do Brasil: An Explosive Celebration of Music and Dance takes place at the Vancouver Playhouse on November 8 & 9. Visit vlacc.ca for tickets and information. 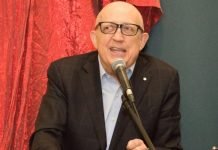