February nights may be getting chillier, but the artists involved in Vancouver Opera’s production of La Bohème are just warming up, especially conductor Judith Yan.

Puccini’s opera, cleverly set to open this Valentine’s Day, centers on the love story of artists during the interwar years. Rodolpho, a poet (Yosep Kang), and Marcello, a painter (Philip Adis), live together in a small attic apartment in 1920’s Paris and struggle to stay warm, let alone put food on the table.

When their neighbour, Mimi (France Bellemare) knocks at the door and falls in love with Rodolpho, temperatures rise. Add Marcello’s former lover Musetta (Sharleen Joynt) into the mix, and you have a steamy recipe for a love story like no other.

The production, created by Canadian designer André Barbe and director Renaud Doucet, will come to life under the baton of world-renowned conductor Judith Yan, for whom La Bohème will mark her Vancouver Opera debut.

We had the chance to ask Yan a few questions about her life, career, and thoughts on Puccini’s beloved masterpiece.

Congratulations on your Vancouver Opera debut. What about it are you most-looking forward to?

I have looked forward to this Vancouver Opera debut since the invitation from General Director Kim Gaynor and Director of Artistic Planning Tom Wright. I still remember exactly where I was when my management phoned me and told me about it.

As I work mostly outside of Canada, I am so happy to have the chance to work in my own country, especially for a company as celebrated and highly-regarded as Vancouver Opera.

As well, what a tremendously exciting production to conduct, Barbe & Doucet’s La Bohème. It is an absolutely gorgeous production, one of the most brilliantly thought-out concepts. André Barbe’s design is stunning and the Renaud Doucet’s direction is 100% in-tune with Puccini’s musical intentions. It is an outstanding combination that is extremely rare and exceedingly true – a theatrical experience that I urge everyone not to miss.

Have you conducted La Bohème in the past?

I have had many wonderful experiences with La Bohème.

The first production I ever conducted was in Abruzzo, Italy, in a summer opera festival. At the same festival, we did an outdoor concert and what happened at this concert was one of the most memorable experiences of my career. It took place during Mimi’s aria, Mi chiamano Mimi, when she sings, “Lei m‘intende?” (Do you understand me?) and Rodolfo responds, “Si.” As it was an outdoor concert, there was no Rodolfo, so the entire audience, under the stars, spontaneously responded, “Si.”

An earlier experience was my unexpected audition for Canadian Opera Company, which, like the best things in life, was a surprise. I was just finishing university, observing a La Bohème rehearsal with General Director Mo. Richard Bradshaw conducting, when he turned around without warning and said, “Would you like to conduct?” I thought, “Well, either I go for it, or I can go home.”

I took the chance and conducted act one of La Bohème. Afterwards, Maestro Bradshaw asked me if I was interested in working for him. Three years later I became the first Resident Conductor of the Canadian Opera Company.

How and why did you start conducting?

To be honest, it was a bet.

I was twenty, had never conducted an orchestra before, and someone dared me to conduct Schubert’s Unfinished Symphony in a rehearsal. I did it. He then asked me to come back the next week to conduct Brahms Symphony No. 1. I did, and it was a moment right out of the movie, The Matrix.

As I conducted the work, I physically felt how all the instrumentation fit together. It was as if I was an architect standing in a building they designed feeling every pipe, every wire, every arch, every brick. It took my breath away.

When I was four, my parents wanted to put me in piano, but the music studio wouldn’t take me until I was six, so they put me in ballet first. I ended up studying ballet for ten years, so my first education in music was linked intrinsically to movement. Ballet training has much to do with muscle memory and consistency, and in a way, conducting is very much like that, as you are communicating physically what something sounds like. Funny how sixteen years later, something I learned long ago served me in a way I would never have thought.

Because of the ballet, I won that bet. However, the ability to step up and just do that without thinking was only one percent of what I had yet to learn as a conductor. It’s not an easy profession, but I love it. As an only child growing up, I always seek the chance to collaborate, and now, I get to do this everyday!

Who did you study with? Where did you receive your training?

I was lucky and had incredible mentors, the first being the late Maestro Pierre Hetu. Recently, I made my Edmonton Opera debut with the Edmonton Symphony, where Maestro Hetu was Music Director from 1973-80.  He passed away in 1989, so to conduct Edmonton Symphony was a special chance to connect with him again and really, to say thank you.

My training started when I was very young, first with ballet through the Royal Academy of Dance curriculum, the Royal Conservatory of Music for Piano Performance, then at University of Toronto for Composition. When I finished university and began receiving various Staff Conductor appointments – at Canadian Opera Company, National Ballet of Canada, and San Francisco Opera – that was when my education as a conductor truly began. I’ve been doing this for what seems like a long time, yet there is so much still to learn, and the layers keep getting more and more interesting with time.

Who was your musical inspiration when you were young?  Who is it now?

Everyone and everything! It was easy to find inspiration in every medium: music, dance, plays, art, films, literature, architecture. Even sitcoms – with the use of language, pacing and timing, all this is very much a part of making music.

When I was eight, I discovered I could play by ear, so for fun I would listen and recreate entire albums on the piano. I listened to everything, from the 17th century Baroque to the 20th Century, film scores, R & B, musicals. I listened to Chrissie Hynde, Nina Simone, The Cure, Eurythmics. I listened to the Beach Boys for their chordal progressions, Duran Duran for its indecipherable lyrics but strangely engaging melodies, and Rush for their incredible sense of pitch and rhythm; I bet Neil Peart can conduct a perfect Rite of Spring.

I listened as much to the early and later Glenn Gould recordings of Bach’s Well-tempered Clavier, anything and everything Carlos Kleiber conducted, as I did to the Go Go’s and Aretha Franklin. That’s something people often find surprising about classical musicians; we are as obsessed with pop music as we are with our own.

By the way, I highly recommend going to a karaoke bar with opera singers and orchestral musicians if you are up for an incredibly memorable evening.

What are some of the challenges that are presented to you as a female conductor in a primarily male-dominated career path?

To be honest, I’ve had very little. Conducting is a tough job for anyone, regardless of your gender. The responsibilities are immense and you spend most of your time decreasing the margin of error. Once you get working on a project, everyone quickly becomes more concerned with the outcome than what you look like. Companies are more likely to be interested in whether or not you can deliver the product, represent your colleagues well, and how pleasant you are to work with.

What do you love about Puccini’s music in this opera?  Do you have a favourite duet or aria that audiences should listen for?

Puccini was a genius of understanding human nature. His music might come across as gorgeous, lush, and free, but in reality, there is not a single note or dynamic that is out of place, nor a single instruction from Puccini that should not be respected. Whether you are the age of the youthful principal characters trying to make your way in the world, or older, looking back on your past with nostalgia, you can relate to these characters. Everyone at some point has been the lover or the beloved, the privileged, or the disenfranchised.

I have so many favourite moments in La Bohème.

You will love act one, with a charming ensemble of [Yosep Kang], (Rodolfo), Phillip Addis (Marcello), Neil Craighead (Colline), and Geoffrey Schellenberg (Schaunard), followed by a most ingenious depiction of two people falling in love with the appearance of Rodolfo’s love interest, Mimi, exquisitely sung by France Bellemare.

Act three presents the most devastating and truthful quartet ever written, and act four will break your heart.

With this brilliant Barbe & Doucet production presented by Vancouver Opera, I guarantee that anyone who comes will not only love every moment, but the experience will stay with them for a very long time.

Why do you believe audiences, and therefore opera companies, keep coming back to La Bohème?  How do you think the story is relevant to Vancouver audiences today?

Every time I have been in Vancouver, there is a sense of excitement, utter independence, and unbridled creativity. Having lived and worked in San Francisco, I see a similar adventurous vibrancy in Vancouver, which is what the story of La Bohème is about; a tale of youthful artistic liberation, living side-by-side with an established society.

In any city, you will see each of the characters of the opera on the street: the artist, the poet, the writer finding their voices, mixing with land-owners, socialites, and the ones who have “made it.” In fact, you could set La Bohème in any era, any location, and the story would resonate with you. These subject matters of love, of life, and of death, transcend time, race, and gender, and Puccini lays open our human frailties and strengths with the most devastatingly beautiful music ever written.

What’s next for you?

Along with concerts of works by Wagner, Morlock, and Vanhaul, a Beethoven Mass in C, and Dvorak’s Symphony No. 8 in March and April, I premiere a new ballet for West Australian Ballet/West Australian Symphony Orchestra, La Bayadere, in May.

In June, I conduct a new opera by Dean Burry, Shanawdithit, commissioned by Opera on the Avalon in St. John’s, NL, before returning to Seoul, South Korea in August for Swan Lake with the Korean National Ballet and Korean Symphony.

What is an opera that you dream of conducting, but have not yet had the opportunity to do so?

Verdi’s Otello – the end of act one “Un bacio…un bacio ancora…un altro bacio…”, how does one begin to describe how beautifully one line encapsulates the core of Otello’s love and dilemma? It’s breathtaking, Verdi’s genius. I’ve been the rehearsal conductor for Otello a number of times, but have never had my own production. Not yet.

La Bohème will be sung in Italian, with English surtitles, and plays at the Queen Elizabeth Theatre February 14, 16, 19, and 21 at 7:30pm, and February 24 at 2:00pm. Visit vancouveropera.ca for tickets and information. 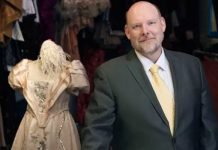 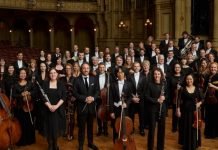 Chor Leoni is staying inside with a free weekly live stream