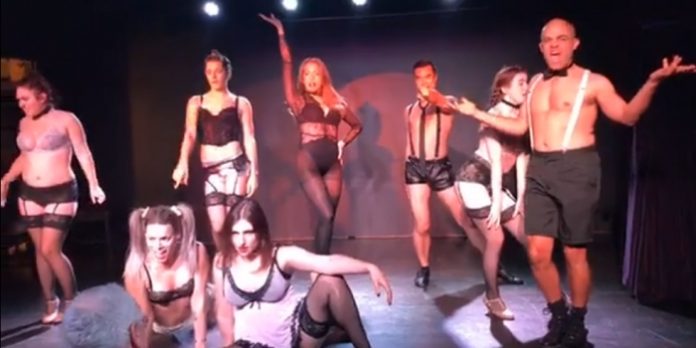 Club XY in the heart of Vancouver’s West End will turn into the Kit Kat Club in the Tomo Suru Players’ immersive production of Kander & Ebb’s Cabaret.

Though it is celebrating its 50th anniversary since its debut on Broadway, Cabaret will be best remembered for the 1972 film adaptation starring Liza Minnelli, Michael York and Joel Grey.

Set in a Berlin nightclub, as the 1920’s draw to a close, the Emcee welcomes the audience and assures them they will forget all their troubles at the Kit Kat Club. With the Emcee’s bawdy songs as wry commentary, Cabaret explores the dark, heady, and tumultuous life of Berlin’s natives and expatriates as Germany slowly yields to the emerging Third Reich.

Vancouver Presents contributing editor, Mark Robins, was live at Club XY with the company of Cabaret as they rehearsed for opening night.

Live with the Company of Cabaret

We are LIVE in Vancouver's West End with the company of the Tomo Suru Players production of Cabaret.Cabaret plays Club XY (1216 Bute Street,Vancouver) October 12-22. Visit http://www.tomosuruplayers.com/cabaret for tickets and information.

40 Parsecs and Some Fuel paints a bleak future

Theatre review: A Christmas Carol is 75-minutes of heartwarming nostalgia

Theatre review: The Twelve Dates of Christmas may very well be the cure for this year’s holiday glum