[pullquote]“I’m thrilled not only with the great shows next season, but also with the amazing roster of artists we are assembling to bring the season to life.” – Arts Club Artistic Managing Director Bill Millerd[/pullquote]The high-flying Mary Poppins joins the a return of the mega-musical Les Miserables in a main stage season at the Stanley Theatre  that also includes a revisioning of Shaw’s Saint Joan from Kim Collier and  Christopher Durang’s 2013 Tony Award-winning tale of Chekhovian delights, Vanya and Sonia and Masha and Spike.

The season first gets underway though with the return of Nicola Cavendish to the Arts Club main stage in a production of 4000 Miles, the story of 91-year-old Vera and her 21-year-old grandson.  The Stanley season is rounded out with the British comedy One Man, Two Guvnors and another Tony Award-winning musical, In the Heights, with its story of finding one’s place in life.

Over on Granville Island Stage, last year’s box-office and critical hit Avenue Q returns before heading out on a tour, as well as productions of the Pygmalion-style drama Educating Rita and Godspell, the Stephen Schwarz (Wicked) musical based on the Gospel of Matthew.  That stage’s season also includes The Mountaintop, Katori Hall’s reimagined story of Dr. Martin Luther King’s last night on earth and Aaron Bushkowsky’s new play Farwell, My Lovely based on the novel by Raymond Chandler.

At the smaller Revue Stage the season is filled with four shows including Blue Box, Carmen Aguirre’s self-penned story of a life with the Chilean resistance movement to a passionate affair with a Hollywood TV star to present-day Vancouver.  Charles Dickens’s A Christmas Carol gets another work-out with an improvised “twisted” version just in time for the holidays and the Arts Club partners once again with the PuSh Festival in presenting Bullet Catch, a show that promises wondrous acts of mind reading, levitation, and the most notorious finale in show business.  The Revue Stage season comes to a close with the premiere of Shawn Macdonald’s new script A Love Story, in which the world of Sister Judy, a university theology professor, is rocked when a student challenges her notions of love and devotion.

On tour, the Arts Club production of Avenue Q will be joined by productions of The Odd Couple and The Foreigner. 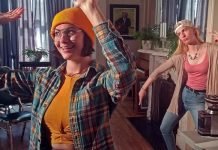