After a months-long intermission, the Arts Club Theatre Company is getting set to reopen the doors of the BMO Theatre Centre for Spaced Out!, a summer fundraising series.

“We’re excited and nervous,” says Mom’s the Word Collective member Deb Williams. “We are happy to be doing this to help raise money for a theatre company that we’ve always found our home with.”

For the reading, the Collective will perform pieces from their previous shows and new material from a yet unnamed holiday edition scheduled for the 2021 Christmas season. Half-jokingly, Williams says audiences should send the Arts Club an email with suggestions for a name.

“I suppose that is still a possibility, but I don’t think any of us are holding our breath for anything right now,” says Williams of the possibility of this newest Mom’s the Word making it to the stage next year. “Everything is really on shaky ground. It is a very odd time to be a theatre artist.”

Continuing to write the new holiday show via Zoom while physically separated, Williams and the rest of the Collective are looking forward to trying out some of the show on stage.

“It is a very different way of creating. We usually spend so much time together, so being separated by these little squares has been tricky,” she says. “We’re just happy to be able to try out some of our new material in front of other humans.”

But along with getting back on stage, Williams is also looking forward to seeing familiar faces in real life. “It will be hard to stay separated, but we will.”

Spaced Out! is the first instalment in a planned fundraising series taking place throughout the summer. The series will not only bring theatre back to the Arts Club’s stages but will also raise money for the company’s youth and education initiatives and new play development programs. More information on upcoming events and performers will be released soon.

“We miss our Arts Club family of donors, patrons, and artists more with every week that passes,” says the Arts Club artistic director Ashlie Corcoran in a media release. “We’re overwhelmed by the amount of support we’ve received since temporarily closing our venues on March 17, and can’t wait to welcome an audience into our Goldcorp Stage once again.”

Organizers are not taking any chances, though, as they crack open the BMO Theatre doors as all Spaced Out! events will adhere to guidelines established by the BC Ministry of Health. These include limiting the in-theatre audience to 50 and implementing increased distancing and sanitization measures to ensure patron health and safety.

Guests will also undertake a wellness self-assessment before entering the venue, and those experiencing symptoms such as coughing or fever may not be permitted entry. There will be no intermission, and zoned entry times will limit traffic in the lobby. Each guest will also receive a complimentary Arts Club-branded mask with their ticket.

Spaced Out! featuring the Mom’s the Word Collective takes place June 27 & 28 at the Goldcorp Stage at the BMO Theatre Centre (162 W 1st Ave, Vancouver). Visit artsclub.com for tickets and information.

The Relay unfolds online across genres and platforms 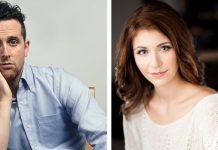