In a press release, the City of Vancouver announced the appointment of Henselmann to the role of managing director of cultural services. In the role, Henselmann is expected to take the lead in shaping the city’s arts and culture vision. The position is responsible for developing policies and programs to support the city’s efforts to ensure residents and visitors have access to a wide variety of activities and experiences.

“We are thrilled to welcome Branislav Henselmann to the City of Vancouver. He brings a wealth of knowledge, experience and creativity to the City having spent time as part of the arts community in New York, London and Munich,” says Mayor Gregor Robertson. “Arts and culture plays a huge role in Vancouver’s economy and livability and we look forward to Branislav helping us do even more to continue to support our thriving arts and culture community.”

Henselmann comes to the city from his role as the executive director of Ballet BC, where he led the organization through a period of extensive growth. Henselmann was also recognized as one of Forty Under 40 in 2014, and currently serves as the chair of Canadian Ballet Companies for the National Dance Council and a board director for the Canadian Dance Assembly.

Prior to arriving in Vancouver, Henselmann was artistic curator with New York City Ballet’s Choreographic Institute, and head of programming & learning at DanceEast, a national dance organization.

“I am thrilled to join Vancouver’s community services team as the managing director of cultural services, where I will have a distinct privilege and a unique opportunity to build on the successes of existing programs that have nurtured some of the most distinct artistic voices in the country – voices such as Ballet BC, where I will be ending my tenure as Executive Director,” says Branislav Henselmann.

In its release, the City of Vancouver reinforced its commitment to arts and culture, with city council recently boosting Vancouver’s Public Art program to $1.5 million to be spent through 2018. Operating grants to cultural organizations has also been expanded to $11.5 million in 2017 including community art grants to $195,000 annually, an increase of $300,000 over two years.

“Public investment in arts and culture, with a firm focus on creating social capital through breaking down barriers and providing an opportunity for cultural dialogue and social interaction is at the heart of any vibrant city,” says Henselmann.

Dr. Kevin Leslie, chair and president of the Ballet BC Board of Directors announced the search for Henselmann’s replacement has already begun.

“Branislav has been an extraordinary Executive Director at Ballet BC during an important period in which Ballet BC has emerged as a company of increasing international importance,” says Leslie. “His unique vision and energy will be missed and will not go unremembered. The Board has already commenced a search to fill the Executive Director position and aims for an efficient transition. We congratulate Branislav and wish him the very best in his new position with the City.” 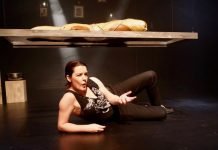