I don’t know if I have ever been more fascinated by a performance than I was with Feasting on Famine.

A contemporary dance show about extreme fitness and bodybuilding, Feasting on Famine follows one man through a bodybuilder competition and his fitness regimen, including regulated food consumption, and a dangerous relationship with supplements and drugs.

Dancer and creator Shay Kuebler is a phenomenal performer. Most of what he does is more of a fitness demonstration than strictly dance – in fact, the show may be more of a physical theatre piece than a dance show – but this in no way downplays his dancing abilities. The man is clearly a dancer. A dancer who has impeccable control over his body, is in phenomenal physical condition, and who is also a very skilled and engaging actor. Watching Kuebler perform is a real treat.

Connections between the worlds of fitness and dance become immediately clear as Kuebler performs a series of athletic feats for a fitness competition. The awe at physical mastery and spectacle of watching a person do something that we could never dream of being able to do ourselves are feelings present in both worlds. For dancers and bodybuilders alike, there is a focus, and possibly obsession, with their physical abilities and appearance. Their lives are devoted to their bodies.

The production is visually slick. James Proudfoot’s lighting design captured the various settings perfectly, underscoring Kuebler’s pumping heartbeat and sometimes surreal activities. Kuebler himself created the sound design, which was so precisely matching his shifts in movement that it’s not a surprise both came from the same person.

Two uncredited Assistant Stage Managers who brought various prop and costume pieces out to Kuebler throughout the show deserve accolades as well. They served more than just a practical function in the show, filling out and supporting the world beautifully.

As someone who knows nothing about the world of extreme fitness and bodybuilding, it was like watching a show about Scientology. Some of it seemed reasonable, some of it seemed a little ‘out there’, and then something would happen that would leave me wondering if that was exaggerated for the sake of the show, or if anyone actually does this to themselves. Do bodybuilders really try to each as much chicken as they can in one minute?

Either way, I was intrigued and entertained the whole way through.

Feasting on Famine continues at the Firehall Arts Centre (280 East Cordova St, Vancouver) from until September 30. Visit http://firehallartscentre.ca for tickets and information. 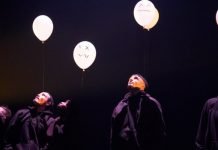