Vancouver audiences will no doubt know Amanda Sum from her theatrical stage work. From the ambitious The Ridiculous Darkness to the ridiculous fun of Pinocchio, Sum has been making theatre for some time now. That is all about to change as she shifts gears to focus on her music.

Not that Sum hasn’t had some involvement in the music scene. But a confluence of circumstances and a little grant money have led her to her debut single, Groupthink. The first of three planned singles, the song and video get its official release today.

“I was finishing school, doing professional theatre work, and doing more experimental theatre work where a lot of it also included music,” she says. “I felt these two disciplines cross over for me, which is a really big interest of mine. But in order to make it happen, I wanted to hone in on what I could do musically first.”

Nearing her graduation from the acting program at Simon Fraser University late last year, Sum found herself concentrating on her music writing. While the pandemic would put a pause in her plans at first, she is now back at it, with Groupthink the first of three singles she plans to release this year.

The inspiration for Groupthink came to her during work on Sarah DeLappe’s The Wolves at Pacific Theatre.

Experiencing some problems with her nerves at the time, she undertook some tests, including having a needle stuck inside her leg.

“I could hear the inside of my body, which was quite eye-opening,” she says. “It was a strange, very particular sound.”

Lying in bed another night, she heard a car drive by. It was a sound that was strangely similar to the sound from inside her body.

“I became a little obsessed with equating humans to machines from that,” she says. “How all these parts internally are working together to make us function and then externally how we’re shaped, socialized and programmed to think or act a certain way.”

In confronting these ideas, Sum set out to explore her conformity in Groupthink.

“I wanted to pinpoint this experience of me a young Asian woman and how that stereotype is very particular in that we’re viewed as submissive,” she says. “Sometimes I am, and sometimes I go with the flow and think things because people tell me how I should feel. I wanted to push back and break from that.”

At the same time, Sum wanted to steer away from being a victim. “I also didn’t want it to be this systemic empowerment celebration but rather highlighting the every day, because that is all I know,” she says.

Sum assembled an all-female team to help. Along with creating a space where she felt comfortable and challenged, she also wanted to champion others with similar experiences.

“I wanted to take this opportunity and share it with others who have also been waiting for their turn,” she says.

Part of that team is Vancouver singer-songwriter Emily Millard, who Sum brought on as producer after the two met while part of Barbara Adler and Kayla Gardiner’s Mermaid Spring.

“She had self-produced many of her albums, but she was interested in producing for other artists too,” she says. “It was a fruitful partnership because we were both learning together.

One of three songs and videos in the works, Sum plans to release the others later this year. Next up is Mary Shelley, which she plans to release during the Halloween season with a Frankenstein theme. The third, Hot-Headed Egos, will drop in early winter.

As to whether they will follow the same theme as Groupthink, Sum says everything she is currently writing is about a social construct or social norm.

“They either come out in more blunt ways or more general, but I try to form it so it feels important and necessary for me.”

While Sum says she has an album in mind, her first three singles will not be part of it as she has several other songs ready.

“I’m going to apply for some grants to flesh it out,” she says. “Going with this all-female team and all-female players are vital to me. It is not an easy root for sure, but I’m happy to take it slow to make the work process something I can stand by. I try not to view it as a product-based thing, but if I can stand by the process automatically, the product is something I will enjoy.” 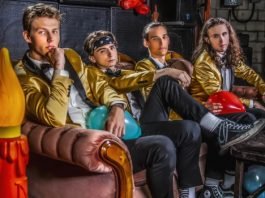