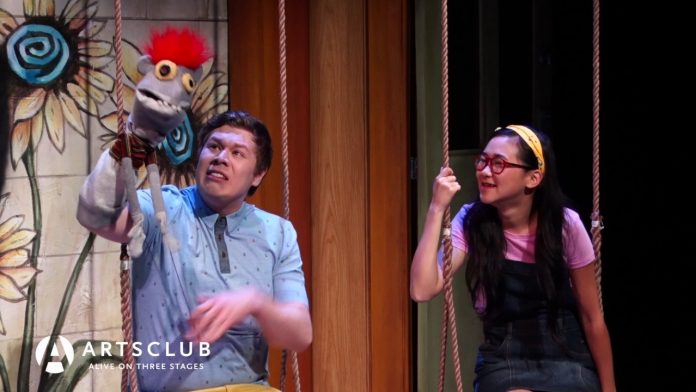 We’re not talking pea-soup possession here, although at one point the puppet does turn heads with a Linda Blair impression. Instead, it is the manifestation of our inner evil thoughts, whether amplified by the devil or allowed to roam free from the deep recesses of grey matter.

In Hand to God, our secret sexual desires become graphic puppet-on-puppet sex. The occasional swear word becomes an expletive driven monologue. The ones we love are crushed by a profoundly insensitive self-preservation. When much of it comes from the actions and mouth of the nebbish Jason, played with a delightful duality by Oliver Castillo, it is all the more shocking. And at times very, very funny.

But the devil isn’t at work exclusively through Jason, and this is where Askins’s black comedy has its biggest impact. The others around Jason – mother, pastor and fellow puppet performers – all have a demon or two rooting around in their heads as well. However, they don’t need the help from a puppet to manifest their thoughts into actions in the real world.

This relatable truth is at the center of Askins’s play. As director Stephen Drover asks in his program notes, “are we basically good and sometimes we slip, or are we basically bad and sometimes we behave”.  More than a question of our ability to control our basic impulses though, Hand to God also asks where the breaking point from the pressures of life is. Are we all at risk of breaking into our two halves?

Helping to bring all of this into focus is an excellent ensemble.

Led by Castillo as the timid Jason, his is a performance of subtle understatement, deliciously contrasted when his sock puppet Tyrone takes over. Stretched over his right hand, Tyrone is not only an extension of Castillo’s performance, he becomes a full-fledged character. Castillo’s puppetry skills are also on show as Tyrone takes on a life of his own and Jason seemingly disappears behind his alter-ego.

As Jason’s mother, Jennifer Lines provides an outstanding performance as the grieving widow. Trying to keep her life together after the death of her husband she throws herself into leading the church puppet group. Lines sets the conflicted Margery on a trajectory early with an exquisitely realized scene inside the family car as she looks to Jason for strength. As her loneliness overwhelms there is no need for a puppet to help act on her urges.

As the two other members of the church puppet group, Mike Gill and Julie Leung are wonderful counterpoints. Gill unleashes his inner demons early, while Leung becomes the moral compass for the group, willing to sacrifice some semblance of innocence to help Jason overcome his demons. And as Pastor Greg, Shekhar Paleja finds the right balance between his human desires and godly intent.

Bringing it to the stage, director Drover has impressive help from designers Brian Ball (set), Jeff Harrison (lighting), and James Coomber (sound). Moveable set pieces, some wicked special effects and mood-setting music all contribute to his vision. Jeny Cassady not only provides the puppets, but it is evident this cast’s performances have benefited from her coaching as well.

Following the success of Avenue Q at the Arts Club, it is probably not a huge surprise to see artistic managing director Bill Millerd looking to puppets for another summer hit. He has found it in Hand to God.

(A final word of warning, if you haven’t already figured it out. This is no Sunday school lesson for the kiddies. While there is no full-frontal nudity, the language is extremely explicit, and the actions of these characters could very easily garner Hand to God a Restricted rating at the local cinema.)

Hand to God by Robert Askins. Directed by Stephen Drover. An Arts Club Theatre Company production. On stage at the Goldcorp Stage at the BMO Theatre Centre (162 West 1st Ave, Vancouver) until June 25. Visit http://artsclub.com for tickets and information.