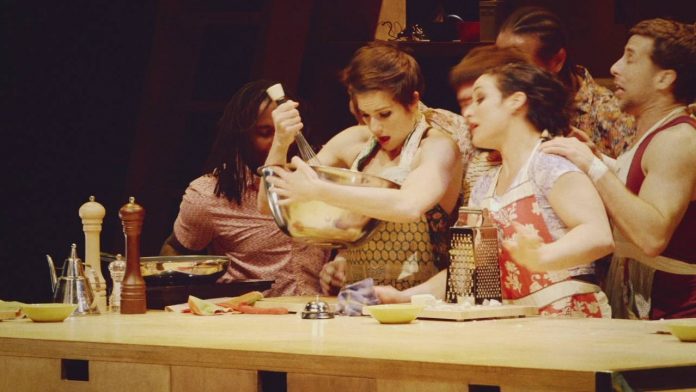 Ringling Brothers may not have been able to do it, but when it comes to reinventing the circus, no one does it better than the Quebecois. Pushing the “cirque” envelope seems to be in their DNA.

While it may not have the instant recognition of its big-top cousins, Les 7 Doigts (The 7 Fingers) continues to reinvent the genre. In Cuisine & Confessions, the Montreal-based company combines circus acrobatics with cooking.

“We started thinking about the show in two halves, where we were inspired by the cast and themes we were passionate about,” says Shana Carroll, who along with her husband Sébastien Soldevila, created the show after having already assembled their cast of acrobats.

With Soldevila a passionate cook, the duo quickly landed on food as the show’s central theme.

“It reminded me of my grandmother who wrote a book called ‘Young and Hungry’, a combination of cookbook and memoir,” Carroll explains. “It was this book of childhood memories and food.”

Built on the real-life personal stories of each cast member, the creation of the show began with story-telling sessions.

“One-by-one they would tell their stories, and it had this element of a confessional,” says Carroll. “They all revealed a secret about their lives, and it became very intimate.”

With a cast of circus performers already in place, the acrobatics in the show were a given. It was the cooking that had to be taught.

“The cast was very enthusiastic about the idea, and we brought in a chef to train them, taught them how to chop properly, and gave them the proper terminology,” explains Carroll.

Not only did Montreal Chef Alex Winniki help refine the recipes used in the show, he also gave weekly cooking lessons to the cast. Each cast member was also provided a chef’s knife to practice with at home.

Those new skills come in handy with all the food prepared and cooked live on stage from the moment the theatre opens through to the final bows. Audiences are even invited to partake in the company’s now signature banana bread at the end of each performance.

Scenic designer Ana Capellutto also helped to make an additional connection for the performers by asking them to share photos of their childhood kitchens, their current kitchens, and their dream kitchens. These photographs inspired her final design.

Capellutto also asked each performer to bring a personal item to keep somewhere on the set to help create this intimate kitchen space. The set continues to tour with these personal items, as do the postcards on the refrigerator which have been collected by the cast form each city they have performed.

With no blueprint for a show that combines acrobatics with cooking, Carroll says there was a lot of trial-and-error. “We had to play around a lot,” she says of the show’s development.

What wasn’t difficult though was finding the connection between food and the circus.

“We originally thought it would be much harder to the connection between the circus and food,” admits Carroll. “But when the cast would tell their stories from their childhood they were all linked to food. So many of our memories are so deeply rooted in food, and it was then easy to bring in the circus act elements which are the equivalent of a monologue themselves.”