Each wrestling with their own demons, they go to great pains to avoid confronting them directly as the playwright explores what it means to be a straight white man in today’s society. They are helped by two non-binary people of colour (Kim Villagante and Raven John), who act as a guide between the play and the audience.

Dividing some audience members and testing pre-conceived ideas about masculinity, Vancouver Presents spoke with actor Sebastien Archibald while in the middle of the Gateway Theatre run of Straight White Men to find out more.

Audience reactions can vary from performance to performance. What scene is getting different responses?

Understandably, audiences have different reactions to a satirical musical number about the KKK set to the tune of Oklahoma.

Sometimes the audience applauds after – as I think many are trained to clap for a musical number as a matter of theatre etiquette – and other times, there a few claps and a couple of times no claps at all.

This has come up in discussion a few times with audiences in our Talk Forwards. People have very different reasons for clapping: some are very uncomfortable in that moment, and laughter and clapping is their only release. Others find it genuinely funny, while others want to support the character who created the number to show solidarity with his attempt to combat racism with satire and action. Some also find it so ridiculously absurd and over-the-top that they can’t help but laugh. There is a concern that some people are laughing because they’re genuinely racist. It’s complicated.

What scene do you look forward to doing each night?

Any chance I get to fight with Jake about Matt and his “condition” is always a blast. Also, the Run DMC Peter Piper rap is a lot of fun. As well, listening to the opening with the People in Charge (Kim and Raven) is always exciting and informs us what kind of audience we’re in for.

The show has some wonderful dance sequences as well as some outrageous fight scenes.

Is there a scene you have to prepare for each night before performing it on stage?

All of them! Every bit of fight choreography, the Oklahoma number, the Peter Piper rap, the Communist “dance”.

The show features talk backs each night. What has been a question or comment that has stood out so far?

Too many to count. For some, it’s a very contentious play, For some, there isn’t enough condemnation of straight white men, and for others, it feels more about class than identity.

Many have commented that it’s refreshing to see straight white men analyze their role in society and the privileges they enjoy – this is explored several times throughout the narrative – as well as the complications that come along with those privileges, especially in our current identity landscape.

For some people, it’s the first time they’re getting exposed to conversations around intersectionality. A few of our more senior audience members are being confronted with their identities as straight white men for the very first time, and that can be a challenge for them. 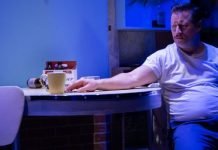 In The Run: Best of Enemies