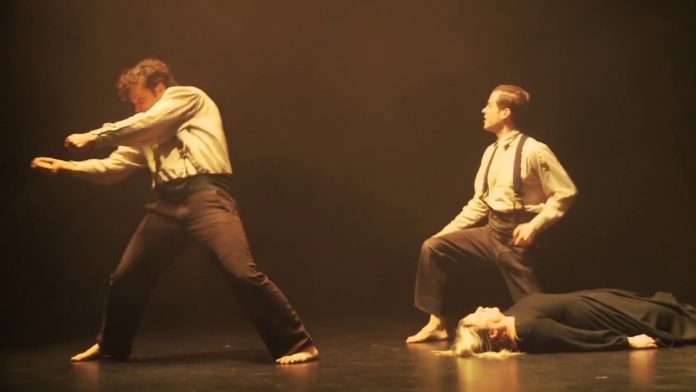 With As I Lay Dying, Theatre Smith-Gilmour brings its adaptation of William Faulkner’s 1930 Southern Gothic novel to life in a vibrant and theatrical way.

The story of the naïvely practical and stubbornly determined Bundren family is rife with tragedy and simple heroics. A haunted and quiet Michele Smith plays Addie Bundren the dying matriarch of a small family farm. Eldest son Cash, an earnest and winsome Eli Ham, is building her a coffin that she can be proud of, while the younger children deal with their grief in various ways.

The biggest issue facing the family is in transporting Addie’s body by mule drawn wagon to her hometown in Mississippi. With the bridges washed out, finding a way to cross the raging waters is all but impossible. As a result, Ma’s body begins to smell despite the thickness of her coffin’s wood.

The show is described as “an evocative and absurd southern gothic masterpiece” and within this framework there are so many theatrical pleasures.

As with the novel on which it is based, the narration of As I Lay Dying jumps back and forth between 18 different main characters and a dozen or so town folk. All are played by just seven actors, who brilliantly transform; their physicality, sense of location and vocal adjustments make each vividly clear.

Costume designer Teresa Przybylski adds pale orange noses to the characters that are not part of the Bundren clan, proving a delightfully surreal quality to the often-tragic story.

The actors also play livestock and add sound effects, ranging from saws to buzzards. But it is in their ability to mime that really dazzles.

Watching the positively electric Benjamin Muir, as Jewel, break a wild bucking horse and then make it gallop off at high speed is like a wizard working with Industrial Light and Magic – you swear you can see the beast.

As I Lay Dying is a captivating and imaginative tale, showcasing the wonders and magic actors can create with just their skills and a bare stage.

When the wagon gets washed away in the river, the actors mime diving under to dislodge the coffin. The scene is so vivid you can’t help but hold your breath as they navigate rocks and logs to rescue Addie’s body.

The entire production has a grand feeling of book pages being feverishly turned. As a scene ends, Andre du Toit’s lighting design blacks out and the barefooted actors race off. The next scene opens with a small spotlight on a single actor, then softly fills the stage like a new chapter coming into focus.

The ensemble is a gathering of accomplished performers. Along with those already mentioned there is Nina Gilmour as sister Dewey Dell, and Daniel Roberts as youngest brother Vardaman. Dean Gilmour plays the patriarch Anse, in addition to co-directing with Michele Smith.

This Southern Gothic style soap opera will not be to everyone’s taste, and while some audience members did not return after intermission, those who stayed experienced a highly stylized and theatrical showcase.

As I Lay Dying is a captivating and imaginative tale, showcasing the wonders and magic actors can create with their skills and a bare stage. I was plumb flabbergasted and overwhelmed with riches in the best possible sense.

As I Lay Dying adapted from the novel by William Faulkner. Directed by Dean Gilmour and Michele Smith. A Theatre Smith-Gilmour production presented by the Arts Club Theatre Company with PuSh International Performing Arts Festival. On stage at the BMO Theatre Centre (162 West 1st Ave, Vancouver) until February 12. Visit http://artsclub.com for tickets and information.