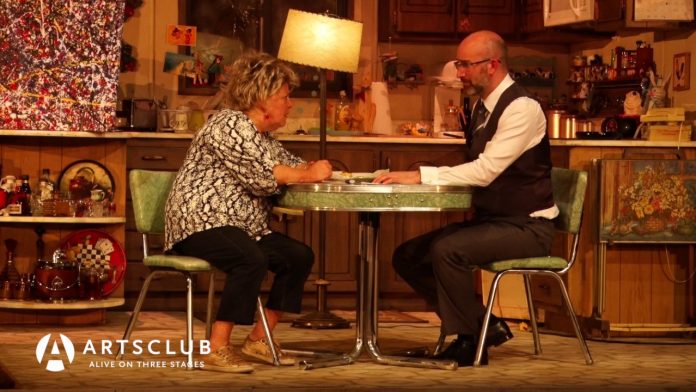 With the proliferation of television shows like American Pickers, Antiques Road Show, and even Pawn Stars, we all dream of the treasures buried in our attics.

In 1991, septuagenarian Teri Horton purchased a painting at a thrift store in California as a gift for a friend. The abstract canvas was soon recognized as a potential lost Jackson Pollock, and if authenticated, could be worth millions. She just needed a skeptical art world to confirm it was real.

It is this true story on which Stephen Sachs has built Bakersfield Mist, currently on stage at the Arts Club Stanley Theatre.

In Bakersfield Mist, Horton has become Maude Gutman, a spry senior with the mouth of a truck driver, living among her collection of tchotchkes in her rundown mobile home. Engaging a New York art foundation to help authenticate her painting, art expert Lionel Percy arrives in a limousine, having just flown in from back east on its private jet.

With a set-up like that it isn’t hard to imagine Bakersfield Mist playing out like a simple fish-out-of-water comedy. But while there are plenty of laughs here, Sachs has also interlaced an exploration of authenticity. That examination is much more than just of the artwork propped up on Maude’s kitchen counter though. It is one of socio-economic status, education, and the search for truth in all its forms, whether it be a Pollock masterpiece or authenticity in one’s life. Is Maude more authentic than Lionel? Or is it the other way round? Perhaps the bigger question should be, who gets to decide?

Bakersfield Mist also serves as a catalyst for a deeper discussion on the relative worth of art, and we’re not just talking about the stuff you hang on your wall. Art is only worth as much as someone is willing to pay, and you only have to look at the prices some Canadians were willing to pay for The Tragically Hip, or the recent sale of a Roald Dahl first edition as examples.

Sachs’ title adds to this discussion, a reference to Pollock’s Lavendar Mist paintings. One of Pollock’s “drip” paintings, when they made their 1948 debut in New York City sales were dismal and critical reviews were tepid. A year later though, Pollock appeared in Life magazine with one of his paintings, with the caption: “Is he the greatest living painter in the United States?”. Coupled with art critic Clement Greenberg’s assertion that his work was a fundamental shift in American art, Pollock’s star began to rise. Without the article and Greenberg’s endorsement, would Pollock’s art ever have reached the prices they currently attract?

Given the stereotypes Sachs has written in his two characters, it takes skilled actors to effectively bring them to life. Under Roy Surette’s direction, he finds those in rock solid (and authentic) performances from both Nicola Cavendish and Jonathan Monro.

Cavendish is particularly good here, with a layered performance easily finding Maude’s mix of desperation and drive. Her ample comedic skills are also put to good use. Monro has a harder time with what Sachs has given him, but rises above the snooty aesthetes. His descriptions of the art work, with images framing the stage from Michael Sider, are exquisite and exhilarating.

Pam Johnson’s set is beautifully realized. An accumulation of flea market finds gathered over decades, a well-worn shag carpet, and decaying surroundings captures Maude’s home inside the Sagebrush Trailer Park with exquisitely cluttered detail. As you scan the bric-à-brac, you can’t but help wonder what other potential financial windfalls might be waiting to be discovered.

As one whose art is words, I leave you with a poem. I’d be curious to know what you think it might be worth.

Art is life
Life is art
The truth is somewhere in-between.
Bakersfield Mist explores that truth
with pathos, laughs, and heart.