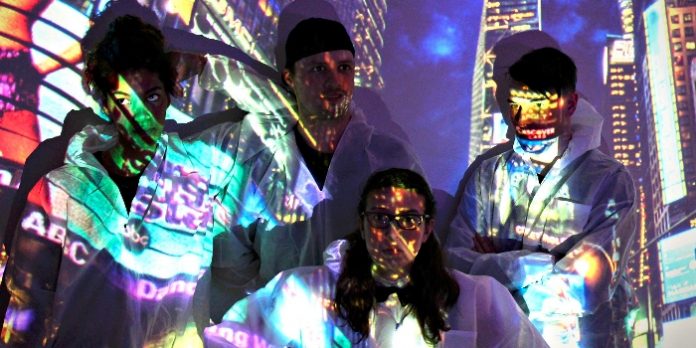 We get it, the world is going to hell in a hand basket and if we don’t do something fast the future is bleak. A theme popping up on Vancouver stages with more frequency lately, it now includes Mily Mumford’s new play Generation Post Script.

What most of these types of shows lack though, including Mumford’s, is the ability to create sufficient stakes beyond a hypothetical future. It is one thing to talk about an imagined dystopian future, quite another to make the journey to that message compelling.

Describing her own play as The Breakfast Club in space, Mumford unapologetically borrows from the film. Here she brings together four stereotypical youth – nerd, jock, artist, and beauty – not in a school library, but in a space station orbiting Earth.

The first generation born without gravity, they are among some 3 million survivors of climate change and its fall-out. Like the John Hughes movie, each dislike something about the others. It doesn’t take much to figure out though they will eventually empathize with the other’s struggles, discover they are not quite so different, and even manage a love connection or two.

To get them to the play’s inevitable conclusion, Mumford sends her foursome on an adventure to Earth. The reason behind what is apparently a prohibited trip though is never fully explained. What do they hope to achieve, and what will the visit solve? Without compelling reasons and equally compelling stakes, we simply don’t care.

There are huge holes in both logic and narrative as well. While visiting Earth, there is inextricably ice remaining at Rockefeller Centre despite the ravages of climate change. And how in the world did these young kids manage to steal an aircraft and return it without arousing any suspicion?

At times the story seems to veer off-course, introducing and just as quickly discarding ideas. The biggest includes a brief introduction to the jock’s father as a hologram, and an even briefer possibility of the space station’s demise within a couple of years.

Presenting science fiction effectively on stage can be tough and while it is hard not to appreciate Cameron Fraser’s projections and “holograms”, Mumford, who also directs, spends way too much time re-arranging the panels on which they are presented.

While the issues explored in Generation Post Script may be real and important, the lack of tension never allows them to fully resonate. Instead, they are simply lost in space.