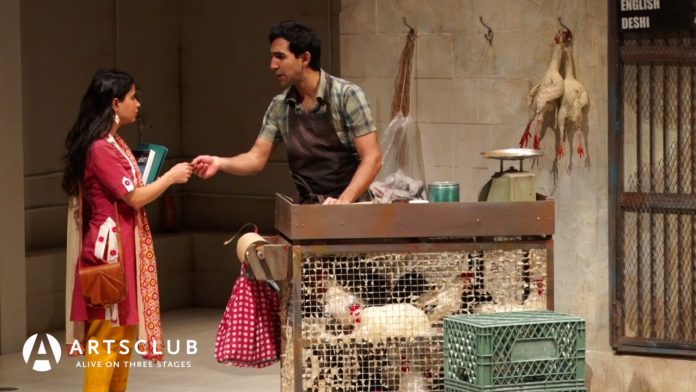 On a set that fades from clinical white to stained gold, The Men in White proves that prejudice remains colour blind.

In Anosh Irani’s  premiere production, we follow two brothers separated by a globe of possibilities as they and those around them struggle for access. Access to infrastructure, who gets it, and why, is at the heart of this timeless yet thoroughly current play.

Chicken-cutter Hasan, a tautly drawn Nadeem Phillip, pining after the beautiful Haseena to his Baba, is told “you belong to a generation of wanters”. Hasan wants to play cricket but he can’t afford a bat. Haseena wants to go to a good college but she can’t be sure her grades are high enough. Hasan’s brother Abdul, ostensibly following his dreams in far off Canada, wants to come home, but can’t leave the kitchen he’s committed himself to as an illegal immigrant.

The Men in White is a tale told by those who are barred from accessing the infrastructure needed to ensure their dreams and the issue of access is one that takes on terrifying consequences as the plot spirals to its sudden conclusion.

Irani’s play is tantalizingly lopsided. The sweet two- and three-handed scenes set in India are expertly maneuvered to allow the performers the space and time to connect. Sanjay Talwar’s Baba and Nadeem Phillip’s Hasan are a classic comedy duo that would feel right at home on the primetime small screen. Jokes and jibes fly with familial ease, and underscore a sense of community and connection that the Indian thread embodies.

The Canadian thread, by contrast, feels forced and unbalanced. References to unseen characters and an underutilized ensemble render the arguments of an Indo-Canadian cricket team shallow.

Abdul, the brother of our hero in the other side of the world, is a secondary character thrust into a spotlight he’s not able to fill while the remaining team members descend into base archetypes exemplified by a shirtless Kamyar Pazandeh dangled in front of us to distract from the confused pacing of the entire thread.

The Men in White is a skillfully crafted and realized portrait of immigrant access and the difficulties faced by the “I want” generation. But poor pacing in the large ensemble cast bogs down an otherwise nuanced portrait of modern oppression. Worth a watch.

The Men In White by Anosh Irani. Directed by Rachel Ditor. An Arts Club Theatre Company Production. On stage at the Granville Island Stage (1585 Johnston Street, Vancouver) until March 11th. Visit http://artsclub.com for tickets and information.