The best of Vancouver theatre in 2018 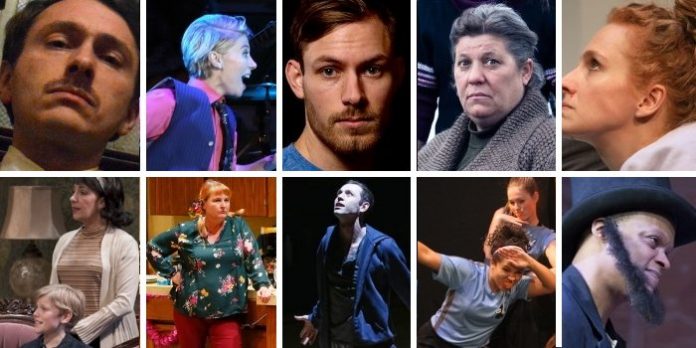 Each year, the contributors at Vancouver Presents take a look back at the previous twelve months to identify those shows that impacted us, both artistically and personally.

As has been our tradition over the past ten years, we present below the best of Vancouver theatre in 2018, chosen by Vancouver Presents contributors Katie Gartlan-Close, David C Jones, Mark Robins, and Chelsey Stuyt (our newest contributor Christine Pilgrim will join us in our picks next year).

Rather than any attempt at ranking, we simply list the ten best in alphabetical order. And to once again prove how difficult it is to pick only ten, we also present a bonus five deserving of special mention, and yet another five who would normally not be recognized in this annual list.

As always, we remain grateful to the Vancouver and touring companies who continue to invite us to see their shows. Between us, we saw in excess of 100 shows in 2018 and remains a testament to the enormous amount of creative work being produced by Vancouver’s theatre community.

We encourage you to make a New Year’s resolution to go see some live theatre in 2019. Our city is lucky to have such a vibrant arts scene, but they cannot do it without you, the audience.

Tightly wound and theatrically intriguing: A Steady Rain (Seven Tyrants Theatre) – not the first local theatre company to tackle Keith Huff’s thriller, but this one found the heart of this gritty police tale thanks to two terrific performances.

As You Like It – (Bard on the Beach Shakespeare Festival)

Musical Shakespeare: As You Like It (Bard on the Beach Shakespeare Festival)– this fusion of Shakespeare and Beatles’ music was the hit of the summer, bringing a whole new meaning to the jukebox musical.

What loves means: Awkward Hug (Cory Thibert) – our only show from this year’s Vancouver Fringe Festival to make our list, this story will reminded us of the power of love.

Dreaming of a happy life: Beauty Queen of Leenane (Ensemble Theatre Company) – not for the faint of heart, this one was expertly crafted and performed.

Heartfelt, hurtful, and all too familiar: C’mon, Angie! (Flying Start Touchstone Theatre & Firehall Arts Centre) – the dramatic tension came from the actors’ commitment to seeing out an impossible conversation.

Fresh and open-hearted: Fun Home (Arts Club Theatre Company) – powerful laughs combined with gut wrenching drama make this one of the best shows our reviewer had ever seen at the Arts Club.

Beautifully powerful moments: The Events (Pi Theatre) – the second show from Pi Theatre to make our list this year, David Greig’s drama explored how grief can be all-consuming.

The Wolves (With A Spoon Theatre in association with Rumble Theatre)

Gooooaaaaallll: The Wolves (With A Spoon Theatre in association with Rumble Theatre) – Sarah DeLappe’s story of a girls’ soccer team packed a punch.

Cain and Abel in the inner-city: Topdog / Underdog (Arts Club Theatre Company) – Michael Blake and Luc Roderique were magnetic as brothers Lincoln and Booth with its view into a world most of us with privilege will likely never fully comprehend.

Here are five more shows from 2018 that also deserve mention:

We don’t usually mention remounts or touring shows in our annual list, but there were five such shows in 2018 that really stood out.

And just because we notice such things, there must be something in the water Down Under as three of these shows come from Australia. You may also notice The After Party Girls have made our annual list for the third time: