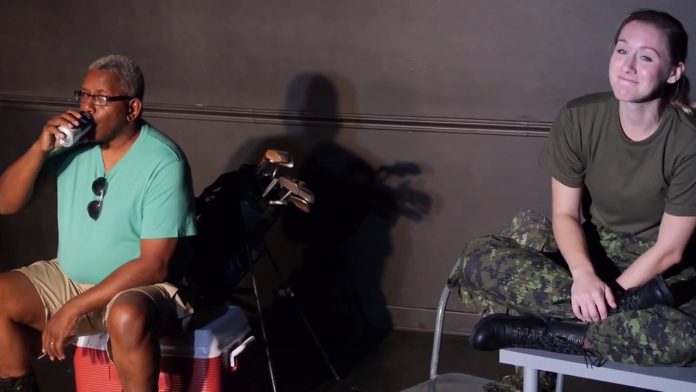 Inspired by his father’s deployment in Afghanistan, Sean Harris Oliver’s The Fighting Season explores the war in Afghanistan through the eyes of three Canadian medical personnel.

Serving as a civilian doctor during the war, it was evident to Oliver on his father’s return that the experience had affected him.

“When he came back you knew he had seen some things, and that got me on this idea of what people were coming back from Afghanistan saw when they came back,” says Oliver.

Using his father’s experience as a jumping off point, Oliver set out to write the story from the viewpoint of three medical personnel that served on the front lines, a field doctor, surgeon, and recovery room nurse.

“The Canadian experience in Afghanistan is very different from that of the United States,” says Oliver. “Many Canadians don’t realize our role in the war, where Canada was in charge of the of the Kandahar hospital during the worst fighting in that conflict. I wanted to write something from the lens of those men and women, like my dad.”

Many Canadians don’t realize our role in the war, where Canada was in charge of the of the Kandahar hospital during the worst fighting in that conflict. I wanted to write something from the lens of those men and women, like my dad. – Sean Harris Oliver

On his return from Afghanistan, Oliver’s father provided the playwright with a lot of material to work with, including a PowerPoint presentation that his dad put together about his experience.

“The play is inspired by my dad, but the character most like my dad is not my dad,” explains Oliver. “It is not his voice. I am creating from my own perspective.”

While writing largely from his own view into the war, Oliver also supplemented his research by conducting interviews with other army medical personnel, and from reading Graeme Smith’s The Dogs Are Eating Them Now: Our War in Afghanistan and Combat Doctor by Marc Dauphin.

“I read Combat Doctor who had been in Afghanistan for a long time and when he got home had some major PTSD issues,” says Oliver.

Dauphin, now a retired Canadian military surgeon, attempted suicide after returning from his role as the last Canadian Officer Commanding at the Kandahar Role 3 Multinational Hospital.

“Luckily for him, his wife helped get him out of that depressed and anxious state,” says Oliver. “He wrote Combat Doctor to help him.”

Oliver dismisses the idea that writing The Fighting Season was in any way helping him or his father to deal with what had happened to his own family as a result of the war.

“I hope he is proud of the work from an artistic standpoint, but I don’t think about whether it will help him,” says Oliver. “I’m more interested on the effect it will have on the general public, hopefully helping people to understand better what has been sacrificed.”

Oliver’s father has yet to see the play, which made its debut at the 2015 Vancouver Fringe Festival.

“I’ll be interested to see what my dad thinks as he has not seen it,” says Oliver. “He wouldn’t admit it, but he is a pretty sensitive person.”

Told from the individual perspective of his three characters, the trio all share a single event that intertwines their monologues.

“I came up with the idea of writing about the three levels of care that someone would get in Afghanistan,” he explains. “With some help and advice from Aaron Bushkowsky, I knew that they all had to be tied together by a single incident.”

The idea of intertwining the monologues also grew out of a 2011 performance of Neil Labute’s Bash, a production Oliver was involved with through his independent theatre company, Hardline Theatre.  In Bash, director Mack Gordon presented the three short plays that make up Labute’s tale of everyday evil into a single interlaced narrative. In The Fighting Season, Oliver wrote the three monologues separately, and then looked for way to unite the trio’s stories.

“Without wanting to give away too much of the story, there is a single event that connects the three,” he says.

Originally presented at the Vancouver Fringe Festival two years ago, Oliver has been able to overcome some of the limitations of the festival’s format.

“We had to cut the Fringe production to fit a sixty minute format,” says Oliver. “This version is about fifteen minutes longer, and allows me to explore some of the ideas a little deeper.”

This new production, a result of winning the Cultchivating the Fringe Award in 2015, has also allowed the production team to add technical elements missing from the original.

“At the Fringe we didn’t have any tech,” says Oliver. “It was three people talking, sitting on chairs. I’m really proud of the Fringe presentation as it won some awards, and got picked up even with a pretty bare bones production.”

The Fighting Season plays the Vancity Culture Lab at the Cultch (1895 Venables St, Vancouver) from January 10-27. Visit http://thecultch.com for tickets and information.