Three times is the charm, as the production of The Book of Mormon, which recently closed its short run in Vancouver, was easily one of best productions of this brilliantly structured script.

Written by South Park creators Matt Stone and Trey Parker, along with Avenue Q’s Robert Lopez, The Book of Mormon was developed over an extensive seven years of development and workshopping before finally making it to the stage. But the trio were creating something unique, and much like South Park, the show rages against arrogance and hypocrisy, and they don’t suffer fools gladly.

The Book of Mormon is the story of Elders Price and Cunningham, two Mormon missionaries assigned to Uganda where they try to convert people more concerned with poverty, AIDS and the ruthless military leader.

The songs follow classic musical theatre styles, borrowing heavily from the genre. While respecting the style they create brilliantly audacious and clever lyrics for songs such as “Hello”, which is reminiscent of “The Telephone Hour” from Bye Bye Birdie. “Spooky Mormon Hell Dream” is the “Tevya’s Dream” song from Fiddler on the Roof, and “Joseph Smith American Moses” is “Small House of Uncle Thomas” from The King and I.

The situations and characters are as bold as they are vulgar, but these writers are not just being provocative. They are smart, and they have a point, even if it is cheeky, such as naming the General Butt Fuckin’ Naked, based on the real-life warlord General Butt Naked.

The script also contains high stakes and twist in the plot that engages and creates tension that helps heighten the comedy. A character suddenly gets shot in the head and in response the General is set to force circumcision on the women in the village. Hardly a laughing matter, but it makes everything bigger, bolder, faster and yes, funnier.

One of the things that makes The Book of Mormon so engaging is in the journeys the two missionaries go on internally. Both young men must learn life lessons, and what they learn in cleverly realized.

This cast is having a great time and the script allows each of them to have a moment to shine and be silly. Unlike some of the touring shows that have come through town, they all look thrilled to be there and sing and dancing with gusto.

The three leads all have great comic timing and strong belting voices. Kayla Pecchioni plays Nabulungi the young naïve villager. She brings some crisp comic timing and well-grounded albeit lightly in the direr truths of the situations. As Elder Price, Kevin Clay is a tall, handsome, clean-cut and very funny baritone, and Connor Peirson is simply brilliant as the sad sack, malapropism spewing Elder Cunningham, who also provides a brilliant sense of stillness for comic effect.

Presented before a sold-out audience, in this case the traditional Vancouver standing ovation was justified. The cast is deliriously playful, the orchestra is bold and brassy, and the script is riotously engaging.

This was a short run, so be sure to be at the front of the line when they next pass through town and cross your fingers that the cast brings as much zest and verve as this one.

The Book of Mormon, book music and lyrics by Trey Parker, Robert Lopez and Matt Stone. A Broadway Across Canada presentation. No further performances.

(Editor’s note: due to technical difficulties this review is being published after the Vancouver run has been completed.)

Sara-Jeanne Hosie is Talking Sex on Sunday: live from the Firehall Arts Centre 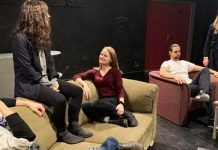