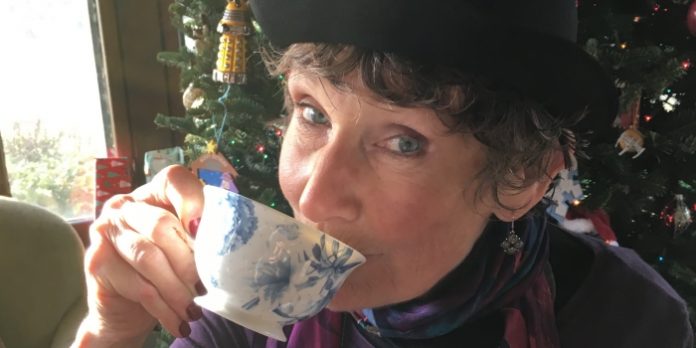 In the conclusion of our special holiday series featuring the contributors at Vancouver Presents, we meet the newest member of our team, Christine Pilgrim.

Once upon a time there was a teenaged girl who worked in a theatrical publicity office for a flamboyant, fun-frolicking boss whom she worshipped.  One day, as they stood watching a rehearsal of The Fantastics from the wings of a London West End theatre, she whispered to her boss, “Do they always practise here?” He replied, “The word’s ‘rehearse’ and yes they do.”

The teenaged girl decided to join an amateur dramatic society so she wouldn’t make such gaffs again.  Instead, she caught the acting bug and ended up in a drama school.  She became an actor, then a comic, then a writer of several one-woman shows which she performed in theaters, museums and schools.

She immigrated to Canada in the early 1990s and wrote, directed and hosted the Vernon Centennial Revue.  That resulted in her gaining Canadian citizenship (long story).  It also resulted in her catching the Canadian history bug and working at many BC historic sites from Barkerville in the Cariboo to the Grist Mill in Keremeos to the Mackie House in Vernon and Roedde House in Vancouver.

She also became a journalist and wrote arts related columns and reviews and thought provoking stories and views for newspapers and magazines from the Cariboo to the Okanagan.

She isn’t a teenaged girl any more.  In fact, she’s quite old.  But she still likes to perform and write theatre reviews, especially for Vancouver Presents.

Immediately after I graduated from a London (UK) drama school I was offered a part in a West End comedy.  However, British Equity wouldn’t allow a newcomer to the business to go straight into the West End so my agent arranged for me to do a bit part in a TV soap. I rehearsed my one line until I was blue in the face: “Lunch, Sir John?”  I still remember it 50 years later.  I hardly needed to bother though, as the West End comedy came off after only two weeks.

My childhood dream job was to perform the duties of a princess.  Isn’t that everyone’s?  I was convinced Princess Anne was in the wrong crib – mine!  And that I was the legitimate sister of Prince Charles.  But I soon grew out of that and plumped for becoming a farmer with a huge brood of chickens and children.  A life in the theatre was never an option until I reached my teens.

The “f word” (an ‘IN’ joke)!  Actually, as one born in Britain, I cringe whenever I hear or see the English language being mutilated.  A few cases in point: “different than” instead of “different from” and “drive safe” rather than “drive safely.” The misspelling of such words as honour (honor), centre (center) and tyre (tire) also send me into paroxysms of frustration.

Colin Firth, most particularly for his portrayal of King George VI in The King’s Speech; and Willem Dafoe who immerses himself in his characters, as exampled when he played Vincent Van Gogh in At Eternity’s Gate.  I was trained in, and adhere to, the same Method acting style.

My grandson Griffin whose biggest indulgence is video games at which I suck.  He reckons I’m from another planet!

My grandson Griffin … without his video games; the complete CD collection of music by the Gryphon Trio; and a player for said CDs.

Learning how to play video games with you-know-who.

Love one another! It’s the ultimate commandment.  When I tour schools as an old-fashioned schoolma’am, the students scribe this mantra in their finest Copperplate writing, using straight pens and India ink.

Shakespeare without a doubt.  Even his punctuation is significant in terms of his characters’ intent.

I’ve just discovered Andrés Barba who writes in a similar style to that of Franz Kafka.  I finished Barba’s “Such Small Hands” on my flight to Chicago to celebrate Christmas with my son and his family.  Can’t wait to read another of his disturbing novels.

Stan in Mr Hanky The Christmas Poo.  What a hoot!  My daughter-in-law reckons I should be Hanky but I told her I don’t do smelly parts.

My grandson Griffin … and if he’s too busy with his video games, Colin Firth.  On second thoughts I’ll just plump for Colin.

Writing stories … performing … and playing anything other than video games with my grandson Griffin.

Risk more!  It’s all only a game anyway.

My son and his achievements … one of them being his family.

That was the intro to a double act I used to do.  I’d constantly interrupt my pompous partner’s Shakespearean monologues with inane questions.  Happy memories!  Thanks for the reminder.