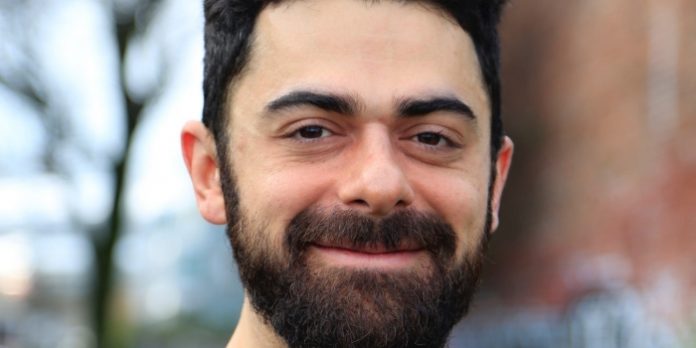 Aryo next appears in the Theatre Conspiracy production of Foreign Radical (Feb 6-11). Recipient of a Jessie Award for Critics’ Choice Innovation and named one of Vancouver Presents’ top ten shows in 2015, Foreign Radical is a theatrical game that explores security, profiling, freedom of expression, and privacy in the age of cyber-surveillance.

Aryo was born in Tehran. In Tehran, he was raised in a big city of high population, extreme poetry, deadly pollution, passionate friendships and political debates. There, he read a lot of plays, bought all the theatre theory books, watched plenty of films, and took some acting classes at Samandarian Institute.

He immigrated to Canada with his parents and his brother in 2005. He only knew of Toronto and wanted to go there for its higher population and bigger art scene, but his father vetoed it on the grounds of “Toronto is too cold; Vancouver has good weather”!

In Vancouver, Aryo worked for a few years in warehouses and shops, and was involved in the community theatre in Coquitlam (Stage 43). Later he took classes at Methodica Acting Studio, trained in corporeal mime with Dean Fogal at Tooba Physical Theatre, and took some transfer courses at Douglas College. The teachers who taught him at Tooba, who were SFU graduates, inspired him. For that reason, he sign up for the journey and now he holds a BFA (Honours) in Theatre Performance from Simon Fraser University. At SFU Penelope Stella, DD Kugler and Stephen Hill mentored him.

Aryo has been involved in a number of theatre, dance and film productions. His most recent performances were in battery opera’s M/Hotel, Justine Chambers’ Family Dinner (Canada Dance Festival), and Theatre Conspiracy’s Foreign Radical. Aryo cofounded The Biting School with his handsome and intelligent brother, Arash. The Biting School has been presented at Dancing on the Edge Festival, Dance Days Victoria, rEvolver Festival and Dance in Vancouver over the past three years.

Aryo is strongly rooted in both physical devised theatre-making that defies the text and the extraordinarily powerful plays that have inspired him since the beginning of his practice. Aryo is interested in the dynamics of power, implications of ideologies, repetition of mythologies, systems of patriarchy, and adaptation of cultures, which were reflected in Silk Road, his research project produced by and created with Hong Kong Exile, on Iranian passion plays in a Canadian context.

Bookstore clerk in a very small and independent publication.

Bahram Beyzai. He’s an Iranian playwright who has been interrogating and preserving the language, the history and the psyche of his culture for the past 60 years.

Pleasure of the flesh.

I played league basketball for maybe two years in my teenage years.

A group photo of my loved ones, a copy of The Baron in the Trees by Italo Calvino, and an unlimited supply of Lego.

Intellectual … (I keep trying to resist it).

9 If you were not a theatre professional, what would you be doing?

One should treat others, as one would like others to treat oneself.

The Boxer by Paul Simon.

Woody in Toy Story. I flail around a lot like him – either on the dance floor or on the street.

Let us Believe in the Beginning of the Cold Season … #ForughFarrokhzad

Federico Fellini. He apparently was the funniest and coolest dude ever. And his charming madness would possibly change my life.

The deep friendships I have built in Tehran and in Vancouver.