Curtis has over 25 years of executive, artistic and educational leadership experience, with a deep understanding of the performing arts as a performer and educator herself. Prior to joining The ACT Arts Centre as its executive director in November last year, she was the executive director for the Vancouver Symphony Orchestra (VSO) School of Music. Previously she has worked for other arts organizations in the United states, and is a former faculty member of the Department of Music at California Polytechnic University and the University of Evansville (Indiana). She holds a Bachelor of Music from Juilliard School of Music and a Master of Music from McGill University.

While in high school, I got a job running the spotlight at our town’s local dinner theatre. The manager thought I could do it well because I was a musician and would hear the musical cues. I did Funny Girl and Fiddler on the Roof. I had to climb into the rafters where the spotlight was, being careful to step only on the beams of the ceiling, in between which was only drywall. One matinee, at intermission, as I was coming down, I missed one of the beams and my sneakered and blue-jeaned leg went through the ceiling of the Ladies restroom, which was packed to capacity with a busload of retirees. It was the most dramatic and comic moment of the show that day, for me and for them.

I thought I would be a writer. I am one of those people who have a half-finished novel I will get to one day.

People who think they are experts. Most real experts never actually think this about themselves.

My late mom, who sacrificed a lot so that we could have the arts as such a significant part of our lives. I have four siblings, and I can’t imagine who any of us would be without her opening the doors of these worlds for us.

Sitting in my hammock with a good book on a sunny, warm day. The book is on my chest and I am mostly napping.

I used to play the viola, a bigger, bulkier violin of sorts. There are tons of jokes about the often-maligned viola and its players, like, “How can you tell if a violist is playing out of tune? You can see the bow moving.” Admittedly, every one of them was likely true about me as a violist!  So I gave it up and pursued the flute, which was a better instrument for me. My violinist sister still threatens to post the photos though.

The complete works of J.S. Bach and Mark Twain, and a word processor, so I could work on my unfinished novel.

9. If you were not doing what you are doing now, what would you be doing right now?

Maybe running a restaurant. I love the idea of creating a space where people know they can relax and connect, and eat well.

Villains are always more interesting, unless it’s real life, and then we need more heroes.

I love the opening quote from The Big Short falsely attributed, I understand, to Mark Twain: “It ain’t what you don’t know that gets you in to trouble, it’s what you know for sure that just ain’t so”.  I love the subversive nature of this line, and it always inspires me to question what I think I know and try to go deeper.

12.  The song that gets the most play on your iTunes / Spotify playlist.

That’s a tough one, as I am always cycling through a musical phase. Right now, I am listening to anything and everything from the Spanish Early Music specialist, Jordi Saval. His music is the perfect balance of being historically-informed and also deeply imaginative and emotional. I am transported to whatever age or country he has delved into in his many projects. Listening in on our earliest glimmers of music and thinking about how that art form has developed in so many ways over the span of a thousand years is quite humbling.

My cellist daughter and I are also listening to the complete recordings of the late British cellist Jacqueline du Pré, who had a tragically short life, but has left us such personal and transcendent performances.

Too many contenders to choose a favourite, but every year around Christmas time, we watch the film version of The Lion in Winter. Peter O’Toole and Katherine Hepburn in the starring roles as Henry II and Eleanor of Aquitaine are magic, but the entire supporting cast – Anthony Hopkins, Nigel Terry and Timothy Dalton among others – make this into a brilliant ensemble piece on the nature of family dysfunction. Perfect for the Holidays. Though the history is dubious, the writing and acting are brilliant. Our family quotes lines from this on an almost daily basis.

I aspire to live life as Bugs Bunny – he’s unflappable, bemused and wry, and always having fun, no matter what the situation.

She had many great adventures, but not nearly enough!

A mix of those still with us and not; Groucho Marx for his inimitable quick wit, Vi Hart, who is a brilliant and funny recreational mathematician and also a musician, writer Robertson Davies, novelist Annie Proulx and the actor/comedian/ pianist, Dudley Moore. After much hilarious and engaging conversation, Dudley Moore and Vi Hart would perform after dinner, and Annie Proulx would write hilariously and warmly about the dinner afterwards, and I could read it over and over again.

Working at something that I am consumed by. Everyone should cultivate a good obsession.

18.  If you could go back in time, what would you tell your twenty-year-old self?.

Don’t sweat it- it will all work out, just not in the way you think it will.

19.  The one thing in your life that makes you most proud.

My daughter. She plays basketball, the cello and chess, all fiercely. I love to watch her young mind focus and lose herself in what she is doing.

To be, of course! Fully. That’s why we all need art in our lives – it helps us be fully human. 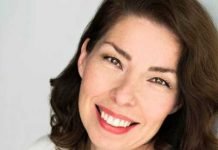