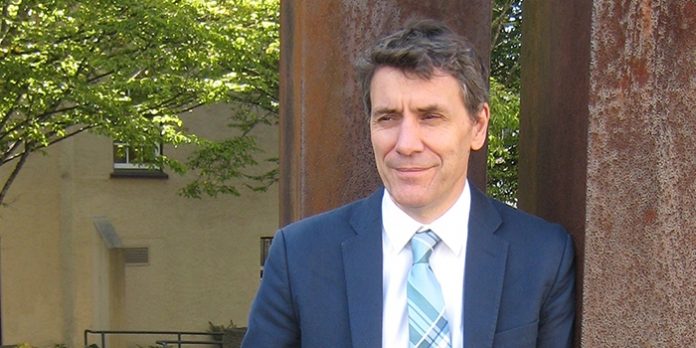 Gerald began his time at UBC in the MFA Directing program on August 15, 1989. He currently holds the dubious distinction for the longest MFA in the Faculty of Arts of ten years less one day.

He received his MFA Directing degree in 2000. He was initially hired at UBC as the Box Office Clerk in 1996, promoted to Manager of Audience and IT support in 2000 and eventually Administrator of the Department of Theatre, Film and Creative Writing (now Theatre and Film) in 2006. He served as Administrator for seven years before becoming Assistant Dean of Facilities and Human Resources in the Faculty of Arts.

He has directed over 25 Beckett productions during his time at UBC.

Pumping Gas.  I pumped a lot of gas.

The job you always wanted as a child.

To be Han Solo.

The word “peeve”. Makes me uncomfortable.

One thing no one knows about you.

I imagine I can play Judas in Jesus Christ Superstar.

Three things you would want with you on a deserted island.

The one word your best friend would use to describe you.

Dependable. I asked him, twice.  My wife would say “late”.

If you were not pursuing a career in theatre, what would you be doing right now?

I’m not pursuing a career in theatre, its why I am an Assistant Dean. Oddly enough, same skill set required.

There’s gotta be a third choice there.

The song that gets the most play on your iTunes playlist.

Wish You Were Here by Pink Floyd.

The one role you are destined to play, and why.

The character Lambert from the movie Alien. I was always in the way.

Shaggy from Scooby Doo. We have the same walk, same taste in clothing, and the same ability to bumble into chaos.

What will it say on your grave marker?

He was a painter … and engraver.

Who would you most like to have dinner with?

Ralph Fiennes and his entire family at Christmas time. That would be a great dinner.

Your idea of happiness.

In a theatre, in the company of actors.

The one thing in your life that makes you most proud.

My kids, Harry and Nina.

If you could go back in time, what would you tell your 20-year old self?

Floss … often.  If you plan on dating anyone … floss often.

Is that a question?