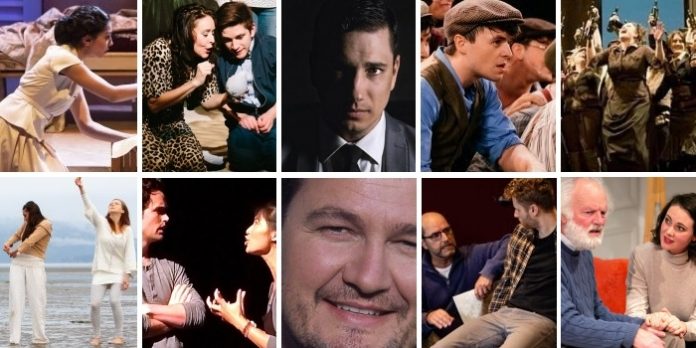 Each year, the contributors at Vancouver Presents take a look back at the previous twelve months to identify those shows that impacted them the most, both artistically and personally.

Traditionally featuring only the best in theatre productions, this year we are mixing things up and expanding our list to include music and dance as chosen by our contributors Katie Gartlan-Close, David C Jones, Andrea Loewen, Christine Pilgrim, Mark Robins, and Chelsey Stuyt.

Rather than any attempt at ranking, we simply list the ten best in alphabetical order. And to once again prove how difficult it is to pick only ten, we also present a bonus ten also deserving of special mention.

As always, we remain grateful to the arts groups who continue to invite us to see their shows. Between us, we saw more than 100 shows in 2019, and we only managed to scratch the surface of what is an enormous amount of creative work being produced in our city.

We encourage you to make a New Year’s resolution to go see some live theatre, dance, and music in 2020. Vancouver is lucky to have such a vibrant arts scene, but they cannot do it without an audience.

Britsh rules: All’s Well That Ends Well (Bard on the Beach Shakespeare Festival) – Set during the final year of British rule in India, Shakespeare’s sexist, classist romp was reimagined into a poignant piece of theatre.

If the shoe fits: Le Soulier (Théâtre la Seizième) – in a year of solid productions from Vancouver’s French-language theatre company it was the world premiere of David Paquet’s boundary-stretching play which left the biggest impression.

Happy birthday Bobby: Company (Raincity Theatre) – proving themselves masters of the site-specific musical, you would have been hard-pressed to find a more talented group gathered on a single-stage this year.

Disney’s Newsies (Theatre Under the Stars)

Dance dance revolution: Disney’s Newsies (Theatre Under the Stars) – Julie Tomaino’s choreography made this the summer show to see.

The full meal deal: Faust (Vancouver Opera) – with impactful performances and great singing this was the highlight from this year’s Vancouver Opera Festival.

Intimate and connected: Gathering Light (Raven Spirit Dance) – part of this year’s Vancouver International Dance Festival, this uncomplicated and beautiful work provided a sense of communal transformation that you want to take home with you.

A breath of fresh air: Lungs (Saint FiFi Collective) – blink and you probably missed it but this was the highlight of the summer theatre season with two outstanding performances.

Russell Braun and Carolyn Maule (Music in the Morning)

Sweet music: Russell Braun and Carolyn Maule (Music in the Morning) – bringing some fine musical concerts to get your day started throughout the year, it was this husband and wife team whose delicate harmonies made the biggest impression.

An exciting debut: Seminar (Alex&Main Productions) – Vancouver’s indie theatre scene is alive and well with one of the newest proving it with a production that was honest, poignant and riveting.

The Father (The Search Party)

Here are five more shows from 2019 that also deserve mention:

We don’t usually mention remounts or touring shows in our annual list, but there were five such shows in 2019 that really stood out: