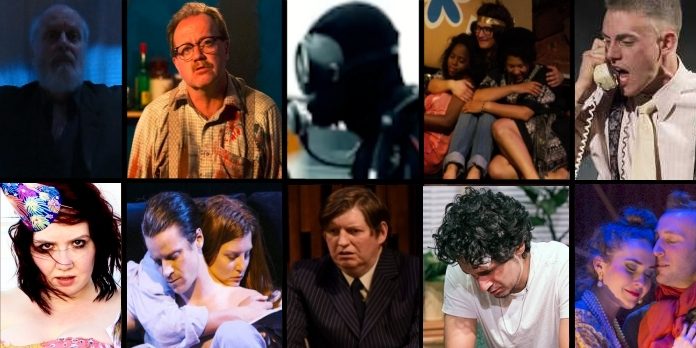 After seeing nearly 100 theatre productions this year, I can attest to the thriving theatre scene in Vancouver.

Here is my list of the ten best theatre productions in 2016, based on what I was able to see this year.

To prove how difficult it is to pick only ten, I also present a bonus five that also deserve another mention, plus ten performances/moments that stuck with me through the year.

As always, I am grateful to the Vancouver and touring companies who continue to invite me to see their shows. I encourage you to make a New Year’s resolution to experience some live theatre in 2017.

Christmas came early: Jacob Marley’s Christmas Carol (Theatre Obscura) – there was an early Christmas present under the tree this year in this beautifully realized production. Linden Banks gave one of the year’s best performances as Scrooge’s long-dead partner.

Finding the right balance: Red (Aenigma Theatre) – this production found that delicate balance between the intellectual and the emotional in a play about art.

Long and beautiful: Hair (Renegade Arts Co) – this young company would not have been born in the 1960s, but that didn’t stop them from finding relevance in this counter-culture rock opera.

Conor Stinson O’Gorman as Roy M. Cohn in the Studio 58 production of Angels in America. Photo by David Cooper.

5The Motherf*cker with the Hat

A melting pot: The Motherf*cker with the Hat (Haberdashery Theatre Company / Firehall Arts Centre) – not without its controversies, there was an honesty in a show about addiction playing in Vancouver’s Downtown Eastside.

4The After After Party

A most excellent adventure: The After, After Party (Katey Hoffman and Cheyenne Mabberley) – these comedy goddesses proved they were the best of this year’s Vancouver Fringe Festival.

3Last of the Red Hot Lovers

In from the cold: Straight Jacket Winter (Théâtre la Seizième, 2PAR4, National Arts Centre French Theatre) – loneliness and alienation has never been so beautiful in this production from Vancouver’s only French theatre company.

Perfection: Onegin (Arts Club Theatre Company) – a beautiful, quirky and emotion-filled love story. There is a reason this new musical swept this year’s Jessie Awards. My biggest regret in 2016 was I didn’t go back to see it a second time.

And then there were fifteen. Here are five more shows from 2016 that also deserve mention:

And finally, here are ten performances/moments that stuck with me this year: