Now on stage at Pacific Theatre, Best Of Enemies is the story of civil rights activist Ann Atwater who is working to desegregate schools in Durham, North Carolina, against the wishes of the local KKK leader C.P. Ellis.

This provocative piece of theatre may seem implausible at first until you realize it is based on a true story in which the two are forced into an uneasy truce when an outsider from Washington enforces the nationally mandated desegregation.

For audiences, much of what the KKK leader says and does are repugnant. By refusing to shy away from the character’s dark side in this production by actor Robert Salvador under the direction of Ian Farthing, it has allowed the transformation of the character to be more significant.

In this ongoing feature, Vancouver Presents spoke with Salvador to find out more about the audience’s reactions, the challenges of performing in the Pacific Theatre space and the discoveries he has made while in the run.

Update (13 March 2020 @ 3:00 pm): due to the COVID-19 pandemic, Pacific Theatre has announced the cancellation of the remaining performances of its production of Best of Enemies, originally scheduled to close on March 21. Ticket holders will be contacted directly.

What has been the biggest surprise from the audiences who have come to see Best of Enemies?

What has come as a surprise, and perhaps shouldn’t be surprising, is the level of steady disdain that I feel from the audience after the first three scenes. The unified audience response to my character and his actions is palpable, regardless of age, gender, or ethnicity. Everyone seems to come together to hate this character and his actions early in the play. That is something I have never experienced on stage before.

As Pacific Theatre is such an intimate venue, have there been any notable responses to some of the things your character says or does?

I certainly have heard the odd, shocking gasp or frustrated groan at the sheer audacity of what C.P. Ellis has to say. In the early parts of the play, the character is largely left unchecked in expressing his point of view, and the audience is asked to deal with that. That is a pretty tough ask. I have been surprised by the odd jolt of laughter coming at seemingly inappropriate times in the piece; I think this is a result of momentary emotional discomfort or shock.

The venue has some unique challenges because it is so small. While there are only four cast members, have there been any near misses or accidents backstage?

The only thing that comes to mind here is [actor] Celia Aloma earning her ‘Pacific Theatre stripes.’  Anyone who has worked at this theatre for any significant amount of time has bumps or bruises on their head to prove it. Those tunnels, which I lovingly refer to as the ‘troll holes,’ backstage are just short enough that most folks can’t stand up straight.  This means that while hustling to get to the next entrance, accidents are bound to happen.  Pacific Theatre regulars have all head-butted an abnormally low doorframe or low hanging concrete beam once or twice. A minor head injury backstage is like a rite of passage to join the hundreds of artists who know and love this space dearly … Celia, you’re PT family now.

Similarly, because the stage is so small, the props and set pieces have to be tucked away. Have there been any hiccups or quick covers that the audience likely did not notice, but you talked about in the dressing room after a show?

The set design has been extremely functional and has been so much fun to work with.  Nothing comes to mind when working with the set, but personally, I have had a hiccup or two. One that comes to mind is a scene in which the passage of time is important to my character.  So naturally, I worked in a few not so subtle interactions with my wristwatch, coupled with dramatic sighs and eye rolls. One evening, though, during my perfectly timed glance to my watch, I realized that I was staring at my naked wrist and was forced to actually act.

As an actor performing five shows a week, you tend to make new discoveries or sink deeper into the role with repetition. What scene has evolved the most for you during the run?

One of the scenes that has deepened over time is actually a scene where I am primarily listening. I have noticed that this has added to the rest of my performance because the information that I am hearing is steadily affecting my understanding of what has come before, and what happens after that moment. It is amazing what happens when I shut up
and listen. 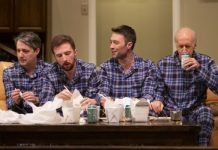 In The Run: Straight White Men